Kill your babies, kill your parents

Parents are hard to write. There are multiple reasons for this. First off, assuming your IRL parents are alive, there's a higher than average chance they will read your book. In the early days, they may even be among the few who do. And you can never discount the odds that they'll be reading between the lines to see if you borrowed anything from them. Whether you did or not.

Beyond that, parents are often secondary characters. You're writing a story about Joe, or Sally, or Joe and Sally. Joe and/or Sally are the stars of the show. You develop the hell out of them. Joe likes peanut butter sandwiches and listens to Bach at work on his headphones to cancel out his moronic, lazy co-worker in the cube next door. Sally fosters homeless ferrets and bakes lemon bars for her elderly neighbor. She had her heart broken by a college sweetheart who never quite seemed to look her straight in the eye. Joe doesn't look her straight in the eye, either, but it turns out he's got a glass one, which endears her even more to him because she has a soft heart for anyone with any claim for an underdog story.

And Sally's mom calls her too often and wants her to visit, but Sally doesn't want to because her mom always pesters her about grandbabies and smokes Marlboro Lights at the table and its bad for both Sally's asthma and appetite. And Joe never got along with his dad all that well because his dad was the coach on his Little League team and got all moany because he struck out too much and dropped a crucial pop fly in the playoffs. Sally's mom and Joe's dad are easy to dislike because they never put much effort into truly understanding their kids.

And they're easy for readers to dislike because they're essentially cartoon characters.

The last game on earth 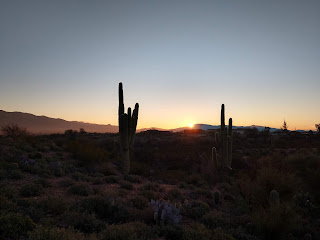 Four weeks ago tonight I was at an Arizona State University basketball game. Well, the second half, anyway. I traveled to Arizona for my niece's wedding. She's a graduate student in Tucson. Stopped off for a few days first up in Tempe, where my nephew, by a different sister, attends ASU. I flew in Wednesday, more than mildly concerned by the news of the virus stretching across the globe. This was early March, a lifetime ago, and while it was enough to keep me staring at the ceiling at night as the trip approached, I went anyway.

Thursday morning I wandered around the ASU campus, hooked up with my nephew, and picked up my sister at the airport. We did lunch, met up with some of his schoolmates, who humored us olds, went to dinner, tossed back a few beverages as if the world weren't about to spin off its axis, and wandered over to the arena in time to watch ASU blow a lead to the Washington Huskies.

Friday morning we slept late, went for coffee, settled on a target for a Cactus League spring training game, and drove up to Scottsdale, where we found a Red Robin in an open-air shopping center that could have, by the names on the fronts of the stores, been anywhere in America. Ate lunch, drove a short distance to the line to get into the parking lot at Salt River Fields. Half an hour later we had the pleasure of paying $10 to park on a parched lawn. Fifteen minutes after that I had the pleasure of paying $240 for three tickets behind home plate. We wanted shade. They wanted half my liquid assets. We arrived in our seats in the bottom of the second and stayed until the end of the ninth, when the game ended, tied 6-6. There are no winners in spring training, just 12,000+ who lose a shit ton of cash watching two teams practice. At least I had the pleasure of seeing Ryan McMahon bomb one out to deep center.

Then again, if we'd known it was to be one of the very last games played all spring (all season?), maybe the price wouldn't have seen so exorbitant. We couldn't have known that then. Well, there were hints. We ignored them, went to the aquarium up the road, which was pretty incredible considering we were in the middle of the desert, then drove back to Tempe and went to dinner at a place that struck me as a hot spot for academics and out-of-town parents with just enough money to spend they won't miss the price of a fancy meal. El vino did flow, as David Brent might put it. It was a top night.

Saturday we made the nearly two-hour drive to Tuscon, which was nothing like I remembered it from when I drove the same stretch in 1990. There wasn't any traffic back then. Nothing like the pickup-truck brigade we endured the entire stretch this time around. Met my mom and oldest sister at their motel, drove to the bridal shower, hung out, then finally arrived at our Airbnb rental house in the hills. Beautiful house. Beautiful neighborhood. Which made it unlike most of the rest of Tucson we saw, which was ... not so nice.

Saturday night came the rehearsal dinner and a chance to catch up with family and meet new folks. And finally, Sunday morning, a chance to relax. The first of the entire trip. We had all morning and part of the afternoon to chill until it was time to get dressed up. The wedding was lovely, in a park in the desert (where else is there?). The reception could only have been more pleasant if the first thing on everyone's mind wasn't the impending pandemic.

But it was, and by Monday morning I wanted home so badly I was up before the sun. Watched it rise between the cacti beyond our backyard. Got to the airport plenty early, eager to go home, afraid to return and spread whatever it was I might have contracted. And that fear was driven deeper when I arrived at O'Hare for my connecting flight. Even more people in masks than there were on the way out. Fear on every face. The closest I'd ever been to Dystopia. 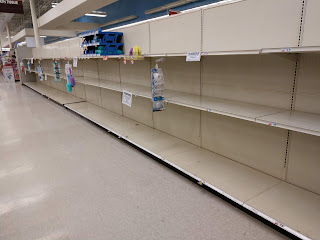 Until the day after, and the day after that. And the week after that, when there was no toilet paper in the grocery store and I tossed anything reasonable into my shopping cart. And the following Monday when my director ordered us all to work from home and not come back to the office. And the next two weeks, as I counted off the days of my incubation period, freaking out every time I coughed, or sniffled, or ached, or felt a temp even slightly over 98.6 that I had brought it home to risk my wife and son.

Arizona was less than four weeks ago. Restaurants, games, shops, bars. A world away from where we are now. We venture out now only to stock up at the grocery store, as infrequently as possible. With gloves. I'd wear a mask if I had some handy.

Arizona lingers in my mind as the stark end of the "before." Everything since is the after. Or the during. I guess that's to be determined.

Posted by JamesB at 7:06 PM No comments: