I was looking for a paperback copy of Sally Rooney's Conversations with Friends on eBay last night, and was struck by how many sellers were offering copies for list price or higher. If Amazon is cutting that price down, what hope do you have of shifting a copy on eBay? Then again, many of these "sellers" seem almost bot-like. Maybe they really are listing in earnest, but are you a bookseller if you never sell a book?

Searching for Rooney's book gave me the idea of searching for my own books on eBay, just to see if any were out there. Now, the vast majority of my sales (80-90%, depending upon the title), have been ebooks, mostly Kindle. So there aren't a metric ton of my paperbacks floating around out there. They exist, certainly, but it's not like a John Grisham thriller, where you can't expect more than a buck and a half for one because everyone else is also trying to unload their copy.

The first one I typed in was The Greatest Show on Dirt. Two copies popped up. One was priced at $14.73, the other at $16.51. Nice round numbers, gotta love it. The best part is the book goes for $11.95 new on Amazon, and pretty much any other book seller you want to search. My theory on these eBay listings is they don't actually hold a live copy of the book. If by some lightning strike someone buys through them, they then go order it through Amazon and pocket the difference. I still can't imagine this ever happens, but nothing really makes sense with these, and that's my best guess. They're like Twitter bots, hoping to sell to other bots.

And then I did the most basic eBay search on my name, querying "James Bailey" under Books. There are a number of other James Baileys out there writing books. Most of what came up wasn't mine. But one in particular caught my eye.

To quote Peter Parker from Spider-Man: Into the Spider-Verse, "We don't talk about that." No, we don't talk about A Misconception of Fate. This was the first novel I ever wrote. I self-pubbed it six years before The Greatest Show on Dirt. And then quickly un-pubbed it. Because it's just not very good. The best thing I can say for it is I finished it. I wrote 2/3 of it back in my 20s, set it aside, then came back to it half a decade and two major moves later.

It's bad. The plot, the characters, the entire concept. I don't think I ever sold five copies of it, and that was five more than should have been sold. And I don't for a moment believe whoever/whatever listed it on eBay actually owns a copy. I'm almost tempted to put in an order to see what happens. Because unless they have some pirate source overseas, there's zero chance they can fulfill it.

I do have a couple copies floating around here somewhere. I won't post them on eBay myself. Some things are better left unread.

I did, however, post copies of my other books. The first three, anyway. I still have inventory on hand. I figured why not undercut the bots and see if anyone places an order. If you happen to be in the market, The Greatest Show on Dirt, Nine Bucks a Pound, and Sorry I Wasn't What You Needed are each listed for $5.95. You pay media rate for the USPS delivery. Still a great deal compared to what you'd pay on Amazon. Order now and it should arrive in plenty of time for Father's Day.

But, please, spare your dad the Misconception. Leave that one for the father of the bots.
Posted by JamesB at 8:20 PM No comments:

Email ThisBlogThis!Share to TwitterShare to FacebookShare to Pinterest
Labels: A Misconception of Fate, eBay, Nine Bucks a Pound, Sally Rooney, Sorry I Wasn't What You Needed, Spider-Man, The Greatest Show on Dirt

Even more fun with Adobe Spark

So I signed up for Adobe Spark this week. They offer a seven-day trial, then a $9.99/month subscription. I wanted to play around with making short videos, which I did over the weekend. Can't say it was a smashing success, but I didn't get hurt, so I've had worse experiences.

Today I took a stab at making an ad graphic for my Nook promo. I'm not going to start applying for graphic design jobs anywhere, but I've seen worse output. Like most everything I've output before. Trying to decide which of these I like better. I think the one with the quieter background is easier to read, but the one with the mowing pattern definitely has more of an at-the-ballpark feel to it.

Posted by JamesB at 7:00 PM No comments:

Posted by JamesB at 2:22 PM No comments:

Email ThisBlogThis!Share to TwitterShare to FacebookShare to Pinterest
Labels: BOGO, Nine Bucks a Pound, Nook, The Greatest Show on Dirt

Special baseball doubleheader: Buy One Get One 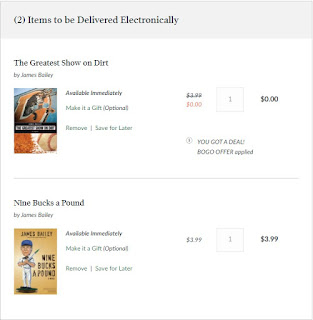 A year and change ago, I shared my thoughts on Barnes & Noble's then new advertising portal. (Which, oddly, is my most viewed ever post on this blog, and it's not even close. I must have had just the right cocktail of keywords to intrigue the Russian bots.) When I crunched the numbers, I couldn't come close to justifying even experimenting with their base package of $300 for 25,000 impressions. For the sake of science, I would love to have seen what would have happened. But I couldn't. Even if I hadn't just been laid off (I was still running out the clock on my old job at the time), I couldn't do it.

Maybe I wasn't alone. Out of curiosity, I poked around the B&N site this week, looking for their ad package to see if they had added any lower price points. I couldn't find anything. At least not on an impression or click basis. Maybe I didn't look hard enough, but the old link didn't work, and nothing else like that came up.

But they did have something else to offer, which might be even better. Two something elses, in fact. And the up-front cost for both is right up my alley--free. They have a promotional tool for authors and publishers to set a discount on an ebook and create their own coupon code. So you could generate a coupon that readers could use to buy your book for 25 or 50 (or whatever) percent off. Readers buy the book for their Nook at the discounted rate, the author takes a prorated cut of the royalty, B&N keeps the rest, everyone is happy.

The second option is a Buy One Get One deal. In this case the author can choose two or more books and allow readers to pay full price for one and get a second for free. Again, no up-front outlay of money from the author. The only cost is whatever would have been earned in royalty had both books been bought at regular price. But if it generates new sales and expands your reach to new readers, that--to me, anyway--is totally worth it. Considering how much money I've lost on various promotions over the years, I'm definitely willing to give it a shot.

So ... here's my first Nook promotion: Buy either The Greatest Show on Dirt or Nine Bucks a Pound and get the other for free. They're both $3.99, so it works the same either way around. We're all starving for some baseball these days. Here's a great chance to fill a little of that void. Two baseball novels, one low price. And if you don't own a Nook, they have an app you can install.

Posted by JamesB at 9:52 PM No comments: