The Greatest Show on Dirt 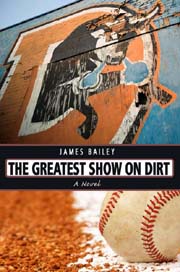 Minor league baseball is the land of dreamers, where young men endure months on the road, long bus rides, bad food, and constant pressure while they hone their craft and reach for the next rung up the ladder. Like the players on the field, the men and women who work for the teams put in long hours for low pay to be part of the game they love. It doesn’t take Lane Hamilton long to understand the appeal. When he’s fired for sleeping through an important meeting at the bank where he works, Lane hooks on as an operations assistant with the Durham Bulls. Every day at historic Durham Athletic Park brings something new, and despite the grueling hours, Lane’s too busy ducking jealous co-workers and amped-up relief pitchers to ever get bored.

Set in the same beloved old stadium where Bull Durham was filmed, The Greatest Show on Dirt provides a look at baseball from a different angle. Players come and go, but there would be no games without a front office to sell the tickets, groom the field, and open the gates to let the fans in. A former Bulls employee who later spent six years covering the minor leagues for Baseball America, James Bailey has crafted a realistic, yet often hilarious, account of a young man’s indoctrination into life in the bush leagues.

Reviewers have lauded the colorful cast of characters, from foul-mouthed, 12-year-old groundskeeper Spanky Paul to subtle middle-aged cougar Faith Andrews, who’s looking to peddle more than t-shirts out of the team’s souvenir shop. Ben Steelman of the Wilmington (N.C.) StarNews says, “Lane’s co-workers are colorful enough to make Damon Runyan’s characters look like the cast of a Henry James novel.” And Tom Hoffarth of the Los Angeles Daily News says, “[I]t’s not just believable, but is easy to imagine as being the starting point for a movie script–even with Bull Durham already a classic. Bailey doesn’t use baseball locker-talk for shock value, but keeps the reader moving at the right pace, fully locked and loaded, trying to figure out how this crumbling old minor-league park will somehow expose the secret to life for at least one person who feels disconnected, but is willing to listen to see if it’s speaking his language.”

6/2/12: Review – Durham Bulls novel looks at life behind game, Ben Steelman, Wilmington (N.C.) StarNews
Lane’s co-workers are colorful enough to make Damon Runyan’s characters look like the cast of a Henry James novel. Besides a few leftover college buddies (see: “Animal House”), you have vendors who work the county fairs in the off-season, a scattering of elderly dugout denizens, the occasional foul-mouthed kid and assorted trailer trash.
Their common denominator, if there is one, is a shared worship of The Game. Nearly all of them played it, nearly all had to face that moment when they realized they’d never reach the big time, but they still can’t let it go. They’ll put up with a lot – including loudmouthed, and often drunken, ballpark fans – to stay near it.

Minor league baseball isn’t about the money or the glory. According to James Bailey, long time Durham Bulls fan and sports novelist, the romanticism of the minor leagues carries a nostalgia for the spirit of the sport: having fun.
But that romanticism doesn’t always pertain to those playing the game. Bailey, N.C. State alum, turns the spotlight of his new book away from the athletes and directs his dramatic comedy piece onto those off the field. His book, The Greatest Show on Dirt, pays tribute to the Durham Bulls and the team’s former stadium, the Durham Athletic Park, a former home away from home for Bailey.

5/22/12: ‘The Greatest Show on Dirt’ is a grand-slam must-read, Aaron Schoonmaker, WRALSportsFan.com

Despite being a “baseball book” the storylines of deep-rooted friendships and newfound passions executed with a sprinkle of life-lesson metaphors make the fast-paced novel an easy and must read for anybody with a summer itch. For those seeking the baseball aspect of the story, it doesn’t skimp, however, offering vivid scenes of game day operations from early morning hours to sun-up nights. People in the Triangle-area will be especially attached as Bailey memorably describes outings to familiar locations along Hillsborough Street, in Cameron Village, Chapel Hill and more.

4/25/12: Alum uses experience with Durham Bulls to write novel, Caitlin Barrett, Red & White For Life
James Bailey ’93 grew up in Seattle loving baseball. When his mom moved to North Carolina in 1990, Bailey followed and immediately started a job with the Durham Bulls. His passion for minor league baseball, and love of the Bulls, inspired him to write his first novel, The Greatest Show on Dirt.

4/22/12: The Greatest Show on Dirt, Chris Wise, Watching Durham Bulls Baseball
Mostly a coming-of-age/love story, what distinguished the book for me was its setting, the old Durham Athletic Park in the early 90’s. I like (but never loved) the DAP and I don’t understand at all the mechanics of putting on a baseball game. That made Greatest Show on Dirt something of a twofer for me, I learned something about both. And reading what it was like to actually work at the DAP was fun.

4/8/12: N.C. State alum James Bailey’s novel revolves around Durham Bulls, Glenn McDonald, Raleigh News & Observer
Bailey’s new novel, “The Greatest Show on Dirt,” is packed with fascinating details about life in the old D.A.P. Those were the heady years after the movie “Bull Durham” made the park a destination for baseball fans, and before the team moved to its new upscale digs. The novel depicts one crazy summer in the life of Lane Hamilton, an N.C. State grad who takes a job with the Bulls after getting fired from his going-nowhere sales job at a downtown bank.

4/3/12: Rub a little Durham dirt on it, things might feel better, Tom Hoffarth, Los Angeles Daily News
As Bailey digs deep into his baseball life here for the landscape, it’s not just believeable, but is easy to imagine as being the starting point for a movie script — even with “Bull Durham” already a classic. Bailey doesn’t use baseball locker-talk for shock value, but keeps the reader moving at the right pace, fully locked and loaded, trying to figure out how this crumbling old minor-league park will somehow expose the secret to life for at least one person who feels disconnected, but it willing to listen to see if if it’s speaking his language.

3/24/12: Novel takes behind-the-scenes look at the minor leagues, Bob D’Angelo, Tampa Tribune
It’s a good read. Bailey has experience writing, with pieces in Baseball America to his credit. He also has reviewed several dozen books on his website. There’s plenty of baseball in “The Greatest Show On Dirt,” but Bailey combines the sport with some romantic tension, mystery (someone is stealing money in the locker room and Lane concocts a plan to nab the suspect), and the all-around goofiness that is present in almost every business — yet seems more comical when put in a sporting context.

2/27/12: The Greatest Show, Judy Johnson, Watching the Game
The Greatest Show on Dirt came as a surprise to me. I expected more in the way of locker room jargon, raw humor, clubhouse antics, hits, errors, and food fights.  These ingredients are all in place, to be sure, lending the novel its authenticity and some of its momentum.   But the book surprised me, because it’s not entirely what its inviting cover suggests – a gritty texture, an abandoned game ball, the amusing mascot, shabby splinters, peeling paint in colors of rust and faded blue.   What I did not expect was a love story; what I did not expect was a candid account of what goes on in a man’s heart during a minor league season.  Deep down, beneath the dirt and grit, men can be such romantic souls.

2/20/12: Good Show, Mr. Bailey, Jeff Polman, Seamheads.com
What’s truly refreshing about Bailey’s book is that it lovingly plummets us into a minor league world we don’t see enough of. Sure, it would be beyond cool to work in the “show,” to be dusting off deep grandstand seats when Prince Fielder is stepping to the dish behind you. But Bailey, who maintains his own excellent baseball book review site and also writes them on occasion for Baseball America, is happy with the arena he “grew up” in. Whether you’re in PNC Park or the DAP, the crack of bat meeting ball is still loud, the greasy and popcorny smells are a match, the games can still be exciting, and you probably can’t tell the infield dirt apart. The Greatest Show on Dirt may be set in the minor leagues, but it has a major league heart.