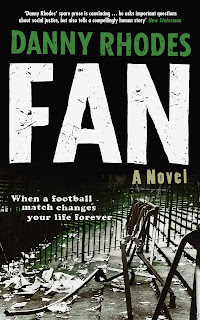 Over spring break we took a family trip to Washington, D.C. It's been years since I'd been there, and I'd never stayed in the city before or visited for more than a day at a time. This time we did four nights in the Embassy Row neighborhood near Dupont Circle. Nice neighborhood, and if my feet hadn't been so tired from walking all day every day I would have liked to have explored Massachusetts Avenue a little more and seen more of the embassy buildings from various countries.

I did find time to visit a book shop a couple of blocks from our hotel, called Second Story Books. Which is on street level, not the second story, but it sold used books, hence the name. I could have spent hours in there scanning the shelves, but unfortunately didn't have that much time. So I bee-lined for the fiction shelves and netted a couple of Richard Russo novels (Straight Man and Mohawk). And then another book caught my eye. Fan by Danny Rhodes. I don't remember where, but I read something about it in the not too distant past, just enough for that "hey, I've heard of this" lightbulb to click on when I saw it. It's a novel about a rabid Nottingham Forest fan whose life is changed after witnessing the Hillsborough tragedy from the other side of the pitch.

Not having been a soccer (ahem, proper football) fan until relatively recently, I wasn't aware of Hillsborough when it happened. Maybe I heard it on the news back in 1989, but it couldn't have left much of an impression. I remember reading about it in Nick Hornby's Fever Pitch a few years back and being absolutely floored just imagining how horrible it must have been. Ninety-six people died at an F.A. Cup match between Liverpool and Nottingham Forest on April 15, 1989. Obviously they and their families had it the worst, but it's clear from reading Rhodes' novel that they weren't the only victims. Rhodes, who was there that day, recaptures the events here through the eyes of 18-year-old John Finch, who emerges from the stadium permanently altered.

Finchy lives with what could be classified as PTSD for the next 15 years, escaping from his hometown in Nottinghamshire down to London to start over but never really forgetting or coming to terms with what he saw. Shortly after former Forest legend Brian Clough's death knocks him off balance, Finch receives a call from one of his old football buddies informing him another of their friends has killed himself. His personal and professional lives both spiraling out of control, Finch returns home to attend the funeral. Only he can't deal with the funeral and doesn't go. He simultaneously battles emotional fallout from his current relationship and one from the past, one that fell apart immediately post-Hillsborough and one that never properly formed because of its lingering impact.

It's a dark story, with quite possibly more f-bombs per page than any I've ever read. Not that they're not warranted. Finchy's dealing with some truly fucked-up shit.

I started reading it the last night we were in D.C., and finished fittingly on April 15, the 29th anniversary of Hillsborough. I have a feeling it will be one of those books that sticks with me for a long time. I'm glad I found it, especially because it's not a book I'd be likely to stumble across just anywhere. It was printed in England and has a sticker on the back with the name of a U.S. distributor. I'm sure I could have found a copy online, but finding it the way I did in Second Story Books will make it a nice souvenir of the trip.