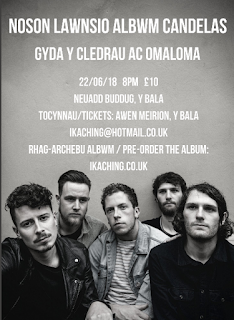 How much of our love for music is dependant upon being able to sing along? It's a factor, definitely. Critical, undoubtedly, with certain songs or bands where screaming along with the chorus is most of the fun. But what about the bands where you can't make out a lot of the words? What about the "Excuse me while I kiss this guy" anthems? Maybe the words you're chanting are not the same ones they are. What if the folks in the video look just like us, but we can't sing along because it's all Greek to us? Or *insert language here*?

I think our brains will try to map it anyway. Guitars and basses and drums know no language. That gets us 70 percent of the way there. Our toes still tap if the beat is right. And we're used to not knowing the lyrics the first few times through a song, anyway. Or more. How many times have you heard "Smells Like Teen Spirit"? How willing are you to bet your life you know all the words, even 25 years after you first heard it?

I listen to a lot of BBC Wales. The English version, as opposed to Radio Cymru. Which is great for catching some Manics, Stereophonics, Catfish and the Bottlemen, etc. That's how I got tuned into a couple of my newer fixes. I've bought more than a handful of CDs I wouldn't have otherwise stumbled across. And then I started following DJs or music critics over there who may dabble in Welsh language artists on the side. (Or maybe the English ones are what they would consider the aside from their viewpoint?) And certain bands seem to show up in my Twitter timeline. In some cases the band name is the only word I recognize, as my Welsh has a long ways to go.

But what I've found is if I search on "Candelas" in YouTube, I can rock for quite a while on what Autoplay serves up, whether I understand it or not. Candelas is an indie-rock band that hails from a village in North Wales with an overwhelmingly Welsh-speaking populace (HT to Wikipedia, for providing an English language bio). They have recorded in both English and Welsh. And if you let YouTube run, you'll get some of their neighbors, Yws Gwynedd, who sound similar enough that you might not easily distinguish the two. And then there's Sŵnami, which shares its lead singer with Yws Gwynedd and drummer with Candelas. No wonder they flow so well between bands and videos. Regardless who's singing, your brain just might sub out some of the lyrics with English similarities, just because you want to sing along so bad.

Flip this all around and you might get a feel for how much of the rest of the world falls in love with American and English bands, who tend to break through in nations where English is at best a second language, taught to school kids who learn it better than most of us master our second tongue. Still, how well can they all sing along to "Smells Like Teen Spirit"? Probably even worse than us.

I remember back in the early 90s when I lived, briefly, in Norway. One of the few tv channels would show music videos on a regular basis. There was a band there that covered AC/DC's "Back in Black." I don't remember their name, but I remember them substituting "news" for "noose" in the first verse. "I'm let loose, from the noose, that's kept me hanging about," became "I'm let loose, from the news, that's kept me hanging about." News that keeps you hanging must be pretty suspenseful, I guess. Whereas pretty much any old noose would keep you hanging, if you were the unlucky bastard whose neck happened to have been caught in it.

So maybe the words aren't crucial. Noose, news, guitar, bass, drums, let it rip. And cue me up some Candelas. Please.