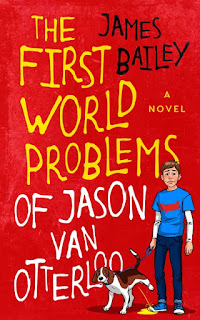 The Book Designer unveiled its October 2018 e-book Cover Design Awards today, and you'll never guess who garnered an honorable mention gold star. Okay, maybe you will if I give you a big enough hint: It was the author's second such honorable mention in a row.

Ringing any bells? Okay, it was me. Well, I didn't design the cover, so credit goes to Ebook Launch, the company that designed both honored covers (as well as the next one, so maybe there will be another gold star coming next year). But it was my concept. And I'm the one who had to go back and forth, saying, no, not quite, change the lettering, change his face, change the color, etc.

We got there in the end.

Joel Friedlander, who runs the Book Designer site, made this comment about the cover for The First World Problems of Jason Van Otterloo: "Charming and well integrated, the hand lettering helps to create a unique look." He makes comments on most of the entries, saying what worked and what didn't. Some of them are quite entertaining (read: brutal) when he's not in love with a particular cover. For example, "Terminally boring. Why would anyone care?" Ouch. That would smart a bit.

Amazingly, each month a handful of authors will submit covers they designed themselves. As if they haven't learned over the years to hire this job out from all the previous critical comments.

It's hard enough catching readers' eyes with a professionally designed cover. Why anyone would go the DIY route is beyond me. I'm sure glad I didn't. I'm happy with the covers of all four of my books. The first two were done by a graphic designer I worked with at Baseball America. Considering she didn't specialize in book design, I thought she did a great job with them. I particularly love the bobblehead on the cover of Nine Bucks a Pound, which was created by another designer and then used as the focal point of the book cover.
Posted by JamesB at 5:28 PM