My also boughts are cooking

One, potentially, helpful mechanism for selling books on Amazon is the Also Boughts. As in, "Customers who bought this item also bought" all this other stuff. As an author, you're hoping your book gets linked up with some other similar titles so readers might find your book while they're browsing selections in your same genre.

At the moment, my also boughts for Sorry I Wasn't What You Needed are not really what I need. The top three are cookbooks. 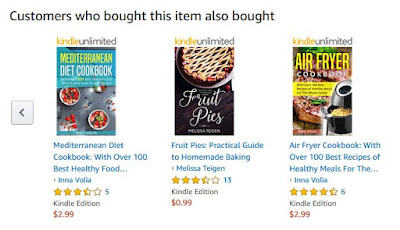 This mystifies me a little. I first noticed the cookbooks there a month or so ago. Admittedly, I had somewhat given up on my sales last year while I was working to get The First World Problems of Jason Van Otterloo ready to release. These days, to generate much in the way of sales on Amazon, you have to play around with Pay Per Click ads. I've had mixed success at best in the past with those, and by early last year they were no longer cost effective. So I stopped advertising for most of 2018 and my sales swirled the toilet bowl.

I found a helpful blog post on Amazon PPC ads a few months back and gave them another go in November. I've had better luck than I did previously, at least with Sorry I Wasn't What You Needed. It does much better than my other books, probably because it's reaching into a more vibrant readership band, where fans of Jonathan Tropper, Matthew Norman, Jess Walter, and others hang out. Ideally, those would be the books that show up in my also boughts.

And maybe if my sales keep growing over the next couple of months as they have in December and January, we'll start to see those associations taking root--as opposed to the Mediterranean Diet Cookbook and Fruit Pies. Which are probably lovely books. But not really what I need.

Of course, what I really need are enough sales for my books to show up on their also boughts, so their readers see mine. But that's two steps down the road. At the moment, I'll settle for the first step of booting the cookbooks out of my kitchen.
Posted by JamesB at 12:29 PM