The Cactus League catching helium like a tooled-up rookie 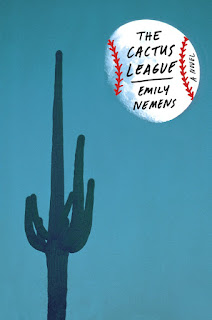 Chad Harbach's The Art of Fielding hit the literary scene like a solar eclipse in the spring of 2011, the rare baseball novel released with both a high six-figure bonus and the commensurate fanfare. Reviewers mostly gushed, and Henry Skrimshander took his place among the sport's fictional underdogs.

I was knee deep in baseball books at the time, polishing off my first novel, The Greatest Show on Dirt, while also reviewing books for both Baseball America and my own blog, Bailey's Baseball Book Reviews. I've always loved a good baseball novel, and I kept a vigilant lookout for them. The Art of Fielding was a hit in my scorebook, not that it needed my backing to push its way onto the bestseller lists. Several other fine baseball novels came out over the subsequent years, though none seemed to make more than a small ripple. I banged my drum for Joseph Schuster's The Might Have Been, Jeff Gillenkirk's Home, Away, and Philip Beard's Swing, among others. But you'll forgive casual baseball readers for missing them.

The Might Have Been and Swing made Spitball Magazine's short list for its annual Casey Award, the highest honor for a baseball book. That in itself is something of an achievement, as only two other novels have survived to the finalists stage (Spitball's top 10) since The Art of Fielding did in 2011. That's an average of about one every other year.

It will be interesting to see if Emily Nemens' The Cactus League finds its way onto the list this year. I'm not quite as plugged in to the baseball book world as I was several years ago, and I only became aware of it last month when I stumbled across a link on Twitter. All of a sudden, however, I can't miss it. I'm seeing references to it everywhere. Maybe this is just it catching helium as it neared its release date (Feb. 4, which was yesterday). The downside of not reviewing books these days is I actually have to pay cash money for them (though as an author, I can totally respect and appreciate that). So last night I ponied up my pesos and ordered The Cactus League.

I know little more than what you can read about the book on its Amazon page, and I'm kind of happy to stay at that level until it arrives. Sometimes the best way to avoid letting other opinions influence your own is to simply avoid them altogether. That said, I'll certainly be willing to share mine once I get through it.

I can already tell you this much: Readers are searching for it on Amazon. And I know this because I've added it and Nemens to the list of books and authors I'm targeting with ads for The Greatest Show on Dirt. For those unfamiliar with how these Amazon ads work, as an author you "bid" what you're willing to pay for your ad to appear as a sponsored product on other pages. It's a constant effort to gauge which books help drive traffic (and more importantly, sales) to yours. Amazon's statistical dashboard is almost fascinating enough to justify the investment. Over the past seven days, I've had 47 "clicks" based on various search terms. Half of those (24) have been searches on The Cactus League, Nemens' name, or some combination thereof.

Though it hasn't actually arrived yet, The Cactus League has stepped into the on-deck circle in my book pile. By the time the real-life Cactus League gets underway, I should have a better feeling of whether it has justified its hype as--to my sense at least--the biggest baseball fiction release in nine years.
Posted by JamesB at 7:24 PM