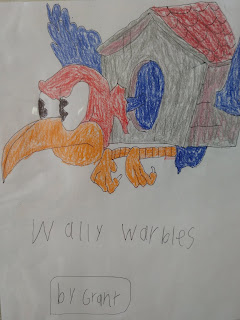 Like most boys on this planet, my son spends a goodly chunk of his time with some sort of game controller in his hands. When he's not playing something on the PlayStation or Nintendo Switch or iPad, he's generally watching a YouTube video or a TV show about other people playing video games. He's had his love affairs with Fortnite, Roblox, Disney Crossy Road, and Mario Kart. He tends to go all in, get it out of his system, and then move on to the next.

His passion this summer turned to Cuphead, which for those who have never seen it, was created with the look and feel of a 1930s-era cartoon. There's quite a back story to it all, which I will confess I didn't really understand until a quick visit to Wikipedia. Cuphead and his brother Mugman have to fight a series of bosses to reclaim the contracts for their souls that they had previously entered with the devil. Beat all the bosses, then beat the devil, and Cuphead wins his own soul back. 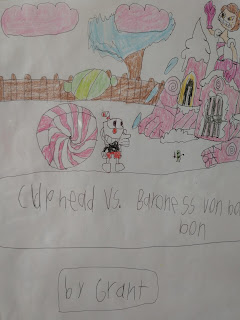 I've oversimplified it quite a bit, but it's deep stuff for a 10-year-old. Not that you need to understand all that soul-selling to play the game. You just have to shoot and move and avoid getting hit. Which he's much more adept at than I am. I don't play many video games with him, because I suck, and the controllers hurt my fingers. (I'm old.)

The game features quite a jazz soundtrack, which he is similarly obsessed with. His current playlist on his iPad is composed exclusively of Cuphead tracks. If you didn't know any better, you would think they were all original to the 1930s, but they were recorded for the game. The music and artwork have received quite a bit of praise, and the game itself has won a bunch of awards (h/t again, Wikipedia). 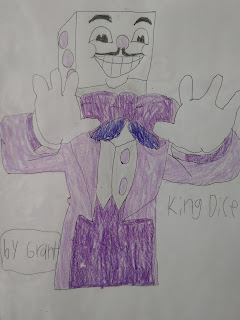 He picked up another hobby this summer, which I'm not ashamed to say he's also much better at than I am. He's started drawing. It began with some of his favorite Disney characters. He would draw the outlines in black pen, then color them in. He's got rows of them taped up on his bedroom wall, and they're all pretty darned good.He recently began combining his two pastimes, drawing characters from the Cuphead game. But he had a rule, he would only draw a boss after he defeated it in the game. So as his Cuphead won soul contracts from the devil's runaway debtors, my son would draw them. One by one, he committed them to paper, until the entire cast had been captured, including the devil. 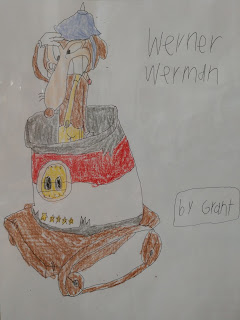 Based on the games that have come and gone before it, I know his fascination with Cuphead will wane. I only hope he sticks with the drawing, because I think he's got a talent for it. And I'm not just saying that as someone who never advanced beyond stick figures. I'm also saying it as a proud dad.
Posted by JamesB at 7:13 PM