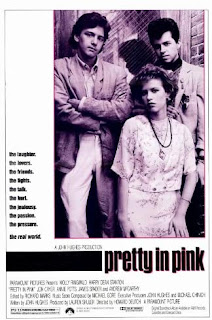 Thanks to Covid, I've wound up with a rare bit of time on my hands the past couple of days. I keep finding myself on the couch, remote in hand, wondering what to watch to kill off some time. Some nostalgic person on my Twitter timeline planted a seed Thursday afternoon with a post about the Pretty in Pink soundtrack.

I hadn't seen the movie since it came out back in 1986. I was a junior in high school, and there may or may not have been valid comparisons made between my hair and Duckie's. Certainly nothing intentional. Not my fault he had nice hair. I certainly didn't dress like him, and while I may not have been the most popular kid in school, I wasn't quite the outcast he was, either.

Beyond the hair, I can't say I recalled a lot about Duckie, the character. I vaguely remembered the plot, or at least the key points. The ending matched my memory, the rest of it fell into place well enough, though there were points I was waiting for things to happen that happened in other movies. Sixteen Candles, perhaps?

I'm on a minor 1980's nostalgia thing lately. I picked up Tell the Wolves I'm Home in part because it was set in 1987, the year I graduated. I was practically obligated to watch a Molly Ringwald movie. Consider the itch at least partially scratched.