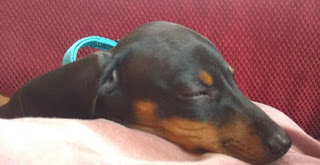 We got a dachshund puppy 3 weeks ago. Her name is Charcole, and she is such a sweetheart. At just over 5 pounds (and growing), she's a perfect lapdog. And since I'm the last one to bed, I'm usually the one to put her to bed, which means some nights she hangs out with me as I work. She's great company. I'll have to work her into the Acknowledgements when I'm ready to release.
Posted by JamesB at 7:30 PM