Yesterday when I tuned in, there was no Alan Thompson. I didn't think much of it, other than it was a mild disappointment as I enjoy hearing him talk about music. He's a storyteller, and has met so many musicians over the years he always had something to share that I didn't know before. Sometimes he'd play clips of interviews from his weekend show or a special presentation, like his excellent documentary on the time the Sex Pistols came to Caerphilly 40 years ago. But yesterday, no Alan. And today, sadly, I found out why in a post on Twitter. 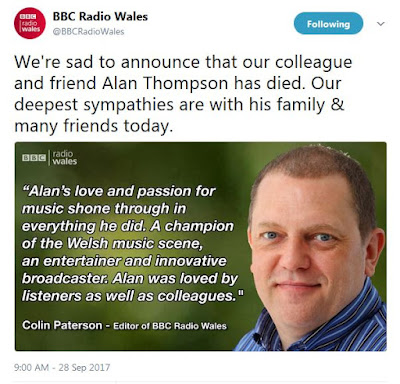 I froze. It hit me like the news last Christmas when George Michael died. Only this was more personal. This was a friendly voice every Wednesday morning. A guy only six years older than me. A genuinely lovely man I'd have dug sitting with in a pub and soaking up his stories about meeting Paul McCartney or interviewing Blondie or Paul Weller or any of the other hundreds of people he's talked with over the years. Many of whom he name dropped whenever he could squeeze them in on his Wednesday visits.

One of my favorite names to hear him drop was Rob Brydon, whom I know through Gavin & Stacey, as well as some of his other programs over the years. Rob, like Alan, seems to be a genuinely good guy, so it only made sense they were longtime friends, having worked together years ago on Friday night radio. Rob posted what were probably two of the toughest tweets he's ever typed out today, offering his condolences to Alan's family "and all that loved him."

Something tells me "all that loved him" includes quite a few people who may never have met him face to face, but only via the airwaves (or online stream). He will be missed, even here, thousands of miles and an ocean away.

*Note: I'm not Welsh. My father's ancestors came from England, though they emigrated to America in the 1600s.
Posted by JamesB at 6:17 PM