I subscribe to a couple of ebook bargain emails, chiefly because I have from time to time runs specials on my own books, though I also snag the odd $1.99 read when one strikes me. The list I read most regularly is Book Gorilla. Like most such services, it allows you to specify which genres you're interested in. I selected Baseball and Literary Fiction when I signed up. 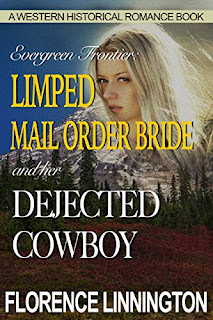 Many days there will be a handful of classics sprinkled throughout the list I receive. Today, for example, it included Dune, Gone with the Wind, and Limped Mail Order Bride And Her Dejected Cowboy (A Western Historical Romance Book), by Florence Linnington. A stone cold bargain at only $0.99.

Not familiar with Limped Mail Order Bride And Her Dejected Cowboy? Oh, you will be soon. This one has instant classic stamped all over it. Here's the tempting pitch on Amazon:

There is nothing wrong for a mail order bride to desire children. But what happens when her husband is unable…
At 26 years old, a limped Cora Duke wants to stop being a burden on her family. She decides to marry herself off to a stranger, by means of becoming a mail order bride.
Cowboy Derek Masters is a man of solitude. A man running from a troubled past and seeking to build a family at his ranch.
When a beautiful and confused Cora sweeps into his life, however, old wounds resurface, especially on the touchy topic of childbearing.
Despite their growing affection for each other, a combination of insecurities, haunted pasts and natural dangers of the west threaten to push Derek and Cora apart.
Derek and Cora struggle to cling to what they have as they realize that they are as different as two people can be.
In the end, they must ask the question: does true love really conquers all?
And, can they finally have children?


So much good, useful words, for so little of the money. And so many questions.

Let's start with the most obvious one. "Limped"? As an adjective? I must need an updated Merriam-Webster's, because it's missing from mine. It does have "gimpy," though perhaps that wasn't the vibe they were going for.

Is Florence Linnington a human, or was this an AI generated novel? I mean, hats off if you can program a computer to write a book that's even half plausible written in something close to standard English, which is about what was accomplished here.

If Florence Linnington is human, is she a composite human? Because she has (they have?) been very, very busy. She has released five of these books in 2020. Each title as enticing as the one before:

[Note: No, I did not make those titles up. Those are real Kindle books currently for sale on Amazon.]

And that's just this year. Amazon offers 25 such titles, all cranked out since 2017. Prolific doesn't feel quite strong enough.

I know for me coming up with a title is almost as hard as writing the book. It's got to be doubly so for Florence, considering the formulaic nature of these novels. They seem to just write themselves. Change a few names, an ailment here, a job title there, and, voila, a new book is born.

In the spirit of goodwill, I've come up with some titles for future releases, which should fit right in with the rest of the catalog:

That last one sounds like a perfect romantic pairing, and might be an ideal way to end the series. Or segue into a new one involving mail order brides and the afterlife.